Winners for 2015 will be announced on the Hollywood Investigator most likely sometime in September, but no later than October 1, 2015.

Details on how to submit your horror film for 2016 awards consideration at: TabloidWitch.com.

The deadline for 2015 award consideration is August 31, 2015 -- so this is the last month to submit your film. Typically, films flood the Tabloid Witch's PO Box during the final month. Apparently, many filmmakers wait until the last moment to submit.

Details on how to submit your horror film for award consideration at: TabloidWitch.com.
Posted by Thomas at 8:17 AM No comments: 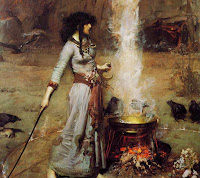 Because this year's WHC is convening in Atlanta, Georgia, with the theme of Southern Horror, the Tabloid Witch was asked to screen films from Dixie. Bearing that in mind, two Southern feature films were selected for the screening.

Big Biting Pig's impressive body of work includes such Tabloid Witch Award winners as Spirit Stalkers and The Creepy Doll. Their most recent film, The Caretakers, was nominated for a Rondo Award and for the Best Feature Film prize at the HorrorHound Film Fest.

News of the latest can be found at the Big Biting Pig website.
Posted by Thomas at 3:39 AM No comments:

David Lynch fans should enjoy Kerstein's film. Motion Sickness relates a strange series of mystical events, filled with sexual symbolism and dualism. Beyond that, it's difficult to say what the story is about (just as it's difficult to explain Lost Highway or Mulholland Drive).

Check out the trailer below. If you like what you see, head on over to iTunes to see the whole film!

As of February 28, 2015, the Tabloid Witch has received 22 horror films for 2015 awards consideration: 6 features and 16 shorts. Entries have come from Argentina, Canada, France, Italy, Portugal, Spain, the United Kingdom, and the United States.