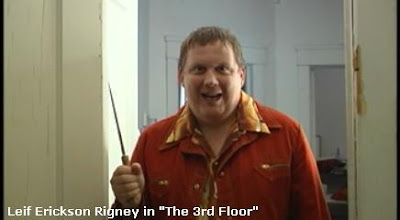 Well, The 3rd Floor is not a masterpiece, but I enjoyed it. If you don't require slick special effects or production values, and if you're interested in the work of indie horror filmmakers working outside of New York and Los Angeles, even if their production values are a little rough, you may want to ride an elevator up to The 3rd Floor.
Posted by Thomas at 9:52 PM