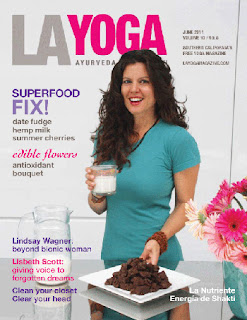 Since winning a Best Actress Tabloid Witch Award in 2006, Blythe Metz has broadened her professional skills into alternative health sciences!

Metz appears on the cover of the June 2011 issue of L.A. Yoga, for which she also wrote an article, "Hemp in the Kitchen."

The former Tabloid Witch Award winner, according to L.A. Yoga, is not only an actress, but a writer, producer, and environmental advocate. She has a Masters in Metaphysical Sciences, and is working toward her PH.D in that field.

The Hollywood Investigator has previously reported on Metz's public appearances.

More information about her can be found at BlytheMetz.com.
Posted by Thomas at 9:09 AM